The Man, The Myth, The Legend 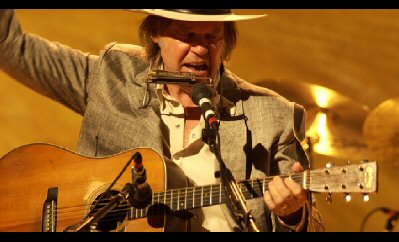 Here's a collection of Neil Young links for biography, reviews of Neil's music including album and CD reviews, concert reviews, and film reviews.


"Heart of Gold" from 1972's Harvest is Neil Young's only number one hit single in his long musical career. The song, on the surface, seems to be a plea for the redemption of all-conquering love. With James Taylor and Linda Ronstadt singing backup, the song was a made for radio hit waiting to happen. And amazingly, the song continues to be among the most requested and performed in concert.

(Listen to MP3 sample clip of "Heart of Gold" here)

"Heart of Gold" has been performed in concert 548 times since its initial live debut on 01/10/71 at the University Of Oregon, Eugene, OR through 11/06/03 at Harbour Fest, Hong Kong, China according to The Neil Young Tour Statistics page. The song disappeared from setlists only during the seven year period from 11/20/76, Palladium, New York City, NY and 01/10/83, Fair Park Music Hall, Dallas, TX being performed only once on 11/12/77, Bicentennial Park, Miami, FL.

The only song more frequently performed in concert than "Heart of Gold" is Powderfinger at 605 times through 2004.

From the album Decade's hand written liner notes by Neil himself on the hit song "Heart of Gold":

"This song put me in the middle of the road. Traveling there soon became a bore so I headed for the ditch. A rougher ride but I met more interesting people there."

The song's appeal has led numerous artists to cover the song. In 2004, Johnny Cash's 'UnEarthed' box set featured a stark rendition as only Cash could deliver in his final days in the recording studio before passing. Other artists which have covered "Heart of Gold" over the years include: Tori Amos, Stereophonics, Better Than Ezra, and Willie Nelson.

"'Heart of Gold' is a song anyone can relate to, and maybe that's why it went to number one on the US charts. Neil's simple acoustic playing and piercing harmonica give it a feeling of utmost importance:

'I'd cross the ocean for a heart of gold'

We all know there's a 'fine line' that cannot be defined which makes all the difference."

"Harvest yielded Young's only Number One hit, 'Heart of Gold,' and helped set the stage for the Seventies soft-rock explosion -- both James Taylor and Linda Ronstadt sing on the album. Along with Young, they were in Nashville to appear on Johnny Cash's variety show the week that Harvest was cut with an odd group of accomplished session players that included bassist Tim Drummond, who had played with James Brown. The sound was Americana -- steel guitar, slide guitar, banjo -- stripped down and rebuilt with every jagged edge exposed. The standout tracks include 'Old Man' and 'The Needle and the Damage Done.'"

A curious sidenote to Neil's song "Heart of Gold" is the song by America called "A Horse With No Name". From the America box set booklet:

"The song's ["A Horse With No Name"] resemblance to Neil Young's work stirred some grumbling as well. Coincidentally or not, it was 'A Horse With No Name' that bumped Young's 'Heart Of Gold' out of the #1 slot on the U.S. Pop chart. 'I know that virtually everyone, on first hearing, assumed it was Neil,' America's Dewey Bunnell says. 'I never fully shied away from the fact that I was inspired by him. I think it's in the structure of the song as much as in the tone of my voice. It did hurt a little, because we got some pretty bad backlash. I've always attributed it more to people protecting their own heroes more than attacking me.' "

In an ironic footnote, America's song "A Horse With No Name" replaced Neil Young's "Heart of Gold", also an acoustic number, as the No. 1 song on the Billboard Charts during 1972.

Not convinced yet? See this if you still think Neil Young recorded "A Horse With No Name". (Note posting date.) "Thirty Three and a Third" is a series of books about critically acclaimed and much-loved albums of the last 40 years. From the book by Sam Inglis, editor at Sound on Sound magazine in London:

"Neil Young’s 'Harvest' is one of those strange albums that has achieved lasting success without ever winning the full approval of rock critics or hardcore fans. Even Young himself has been equivocal, describing it in one breath as his 'finest' album, dismissing it in the next as an MOR aberration.

For all its ubiquity, `Heart Of Gold' is a slight affair: an effortless, straightforward melody set to a sparse four-chord backing, with a lyric amounting to barely ten lines. Young is adept enough to avoid falling into rock 'n' roll cliche, but at the same time, there's little of the emotional directness that characterises his most powerful work. The only hint of autobiography is a glancing mention of Redwood, California, where Neil's ranch is located. Other than that, the theme is simply the search for love, couched in the most general terms."

See Heart of Gold lyrics and Harvest for more. And Neil still continues to perform "Heart of Gold" regularly in his playlists.

Scheduled for release in early 2006, the working title of the Jonathan Demme film of Neil Young's August 2005 concerts is "Heart of Gold".

Over the course of Neil's long career stretching back to the early 1960's and his work in Canada with The Squires, through the 70's, 80's, 90's, and into the 21st century, he has produced major albums which both directly and indirectly shaped the music of generations. With over 40 albums with bands including The Buffalo Springfield, Crosby, Stills, Nash & Young, and Crazy Horse, Young has never been easily categorized with influences ranging from folk, rock, punk, grunge, country, blues, and synth.

Neil Young's 1979 "Rust Never Sleeps" marked a major shift in artistic direction for both Young and the entire music industry. "Rust Never Sleeps" signaled Young's recognition that that there was new force in music -- namely punk -- and that the face of Rock-n-Roll would change forever.

Again at the end of the 80's, the album "Freedom" marked the fall of the Berlin wall and became the anthem for a new era of persoanl freedom and music.

More on Young's CDs and discography.

"In the manner of the best of the traditional blues singers, Neil Young seems totally alone on stage in a way that almost no contemporary performer ever does. But he's not foreboding, and you don't feel shut off. Head down, chin tucked into his shoulders like a boxer, he peers out at you with those all-knowing eyes filled with humour and flashes that beatific, silly grin.

Like Muhammad Ali, he may well be the greatest."

'Rust Never Sleeps' offers some of his strongest songs, both new and old, in performances as fine or finer than those of his recent, partly live record of the same title. The effect here is rougher than the record, less polished with overdubbing; at one point, Mr. Young even mangles the words of one of his best songs. But the intensity of the singing and the playing of Crazy Horse, Mr. Young's longtime partners for electric-rock projects, is as moving as rock can offer. It's so good, in fact, that it almost lets one overlook Mr. Young's theatrical conceits, and almost makes the film recommendable for the general public, after all.

Here's a collection of articles and links of a Neil Young biography forming a chronology and timeline of his musical career. Starting all the way back to when Neil was born on November 12, 1945 in Toronto, Ontario. Follow Neil's career from the classic phase of Buffalo Springfield, to Crazy Horse, onto Crosby, Stills, Nash and Young. On through the punk, shakey and grunge phases. There's a Neil sound for almost every mood - rock, jazz, folk, country, grunge, feedback metal.

Here are some Frequently Asked Questions and answers to Neil trivia. Many of the standard questions like "What's the meaning of 'Powderfinger'" song lyrics?, "Can Neil really out jam Led Zeppelin's Jimmy Page?, "Were Lynyrd Skynard and Neil Young friends or enemies?", and "What song did Kurt Cobain quote in his suicide note?" and lots more.

And if you're wondering whether Neil really has a Heart of Gold, check out a listing of the Benefit Concerts at which he has performed over the years, including Live AID, Farm AID, and the Bridge School Concerts.

Also, check out Thrasher's Neil Young blog for more. It has articles on Neil's influence on other artists like Pearl Jam, Lucinda Williams, Wilco, The Jayhawks, My Morning Jacket and others. So keep on searching for that heart of gold!